The Center for Hip-Hop Advocacy
Home Hip-Hop Can Save America: The Podcast The Art, Science, Brilliance, and Universal Applications of Freestyle Rap with David... 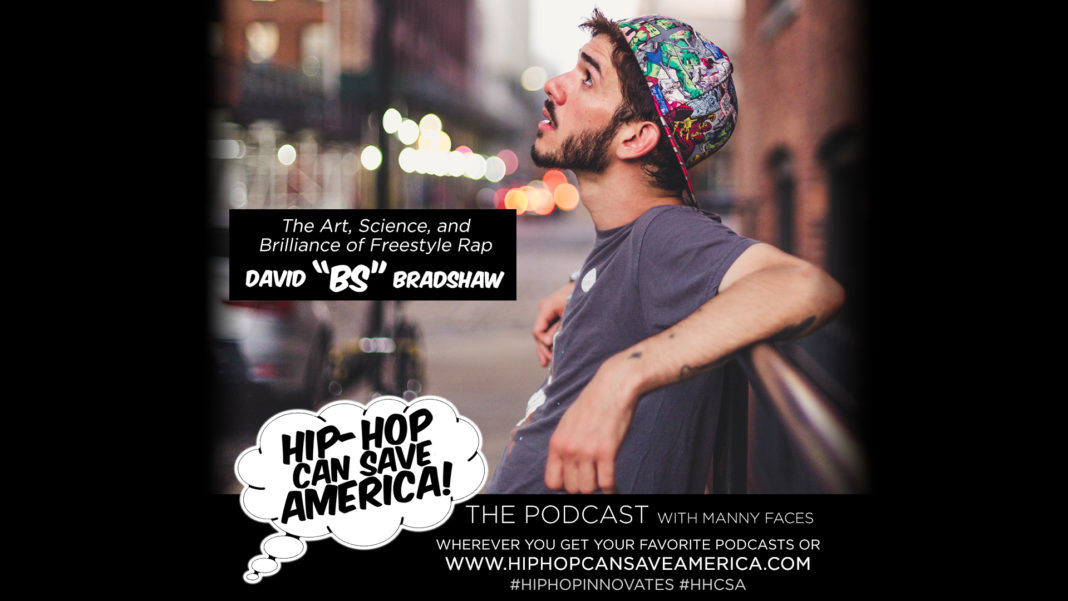 On this episode of Hip-Hop Can Save America!, aka ‘world’s smartest Hip-Hop podcast’ — We’re talking mental fitness — No, not a debate about current presidential candidates, but how a sub-set of Hip-Hop can help enhance linguistic skills, mental acuity, and self-confidence, from the streets to the corporate boardroom.

If I told you that I knew about an activity that anyone could participate in, young to old, corporate to entrepreneurial, creative types to analytical types, high school educated up to PHds, and that this activity could help enhance their communication skills, their ability to think on their feet, to quickly adapt to changing circumstances, to become a better talker, a better listener, a better learner, a better teacher, a better collaborator, a better human…

Would that sound amazing?

What if, at the same time, it sounds amazing?

In this instance, I’m speaking about freestyle rap. Now, even in the context of rap, the word ‘freestyle’ can mean many different things to many people, and could be even more confusing to folks unfamiliar with Hip-Hop vernacular — though the attention that Lin Manual Miranda and Freestyle Love Supreme might be helping — but for the record, here, we’re talking about impromptu, off the top of the head, spontaneous creation and delivery of words, sentences, and phrases rhythmically aligned to a beat — whether recorded, similarly being created on the spot, or, in some cases, only heard internally.

Now, let me be clear. Some of the most brilliant minds I have come across in my life have been freestyle rap artists, and I’m happy to evangelize this to anyone who might be skeptical…

But those who know, know. And one of those practitioners, David “BS” Bradshaw, has not only excelled at this incredibly creative and exciting subset of rap, but has developed an astounding assortment of initiatives that take this artform and its associated skillsets to the next level.

You might expect to hear things like workshops, skill building, exercises, and micro skills in orientations for improv acting, public speaking, or business coaching programs, but these are some of the ways in which BS is proving that the art and science of freestyle rap can help anyone advance their communication skills as much as any of those tried and true practices.

Throw in a game show, and, as he likes to say, he might be the only BS you can trust.

Let’s get into what all this means, as we take a nuanced, intellectual, but still really really dope look at human communication and connection, through the lens of freestyle rap.

And perhaps the best way for me to introduce BS, is like this, in a clip from a competition-based event series that’s been taking place in New York City — as well as in spinoff incarnations in several other countries, and now, digitally — We start with Corey James Gray, formerly known as Illspokinn, instructing BS about the challenge at hand, on a recent online iteration of Freestyle Mondays…