The Center for Hip-Hop Advocacy
Home Hip-Hop Can Save America: The Podcast THIS Is What Hip-Hop Activism Looks Like 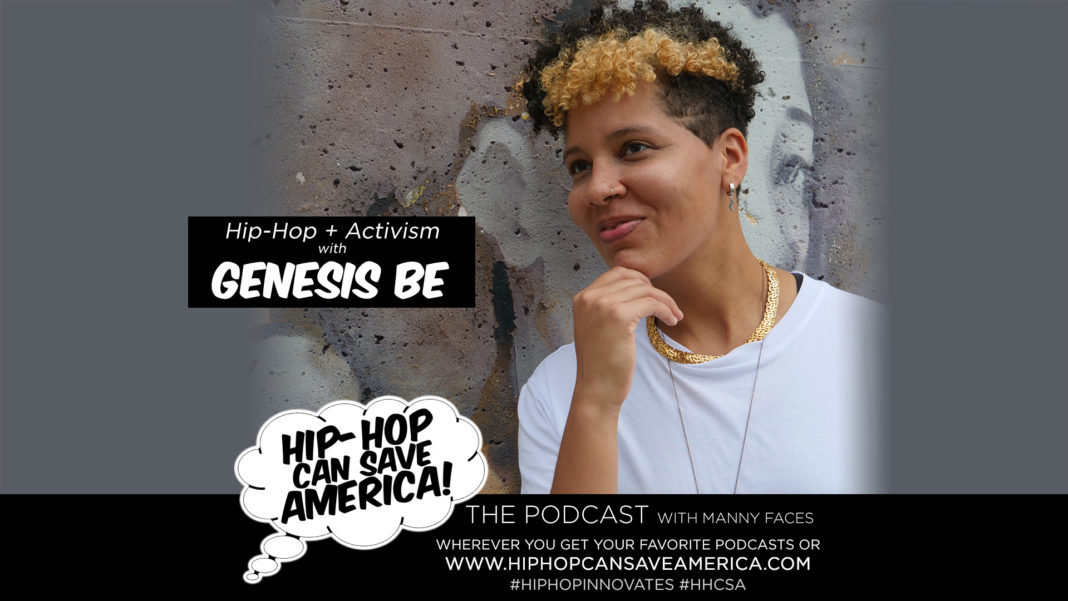 On this episode of Hip-Hop Can Save America! aka ‘the world’s smartest Hip-Hop podcast, we hear from Genesis Be, a lifelong artist/activist who has put her career, and life, on the line making politically charged music, delivering groundbreaking public statements and quite literally, helping make history.

CLICK HERE TO LISTEN ON YOUR PREFERRED AUDIO OR STREAMING APP

Among pontificators both familiar with Hip-Hop music and culture as well as those with only limited exposure or understand, there is a recurring lamentation when it comes to Hip-Hop’s ability as a force for protest… For social justice….

Part of that is based on the landscape of corporate-controlled, cookie-cutter radio programming. Whereas so-called Golden Era Hip-Hop has socially conscious artists with songs in regular rotation on radio and on show like Yo MTV Raps! or Video Music Box, modern programming largely avoids the kind of substance that once shared the airwaves with party songs.

Sadly, that is often the only metric by which Hip-Hop’s role in the fight for social justice is gauged, yet, as I point out in a couple of my talks, this is a bit of throwing out the activism baby with the iHeartMedia bathwater.

After all — Hip-Hop-based education doesn’t sit at the forefront of the standardized academic industry, but there are individuals and organizations that are making incredible impact at that intersection, in nonprofits, in progressive school environments, in after-school or community-based settings, in virtual settings…

Don’t believe me? Listen to some other episodes of this show.

My point is, the same thing exists in Hip-Hop-based activism and civic engagement. While there are occasional eruptions from among the volcanic peaks of Hip-Hop celebrity — Diddy’s Vote or Die campaigns or recent social justice “summits” associated with his Revolt TV, or Jay-Z & Meek Mill teaming up with capitalists and pundits to form the Reform Alliance, Killer Mike’s fiery speeches, etc., I truly believe that the real impact comes from those that are situated a bit lower on the mountainside. Hip-Hop minded activists and artists that are much more in touch with the people, issues, and communities than their upper-tax-bracket entertainment industry brethren.

Not only do they exist, but they thrive, working close with communities and complimenting the resources of other groups with their own talents and abilities to communicate in the unique, compelling way that only Hip-Hop artists can.

From the moment I first heard her rap, to the moment the world saw her stand on stage in NYC with a noose around her neck holding the confederate laden state flag of her home state of Mississippi in an show-stopping display of protest, to her current work traversing the country imploring evangelical Christians to vote morality over party, Genesis Be is the epitome of Hip-Hop artist-slash-activist. Her music speaks soul to soul, she has shown leadership in speaking across ideological divides, she uses her poetry and visual art to inform and inspire, and helped make history with that whole flag situation.

Here’s my talk with Genesis Be.